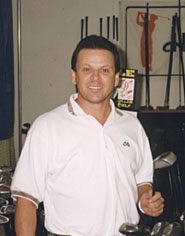 The energetic Don Gafner, a true “idea” person, recently shared his company’s background and views on the golf equipment industry.

After six months, Gafner had accumulated 30 accounts, and decided to lease his own shop space. He also developed a “knack for consignment,” after noticing that the local pros had a lot of inventory they weren’t doing anything with. In addition, Gafner visited pawn shops and antique shows, buying the old classic clubs, and was able to make some additional side money.

By 1986, Gafner entered the retail business, after he was able to acquire accounts with the major manufacturers, despite attempts of being blocked out by the big guys. “I kept fighting and fighting,” says Gafner.

Since then, he has been able to balance the repair and retail business to become a “full-service” golf store. Dallas Golf, the authorized Wilson repair shop in the Southwest US, is well-respected within the industry for their quality and service.

Changes in the Golf Equipment Industry

Gafner has seen major changes since entering the golf industry. Club repair has become easier. “It used to involve a lot of manual labor, refinishing old woods, etc. Now with metal woods, and unitized iron heads, the shafts are easier to put in and take out.”

However, the retail business has become much more difficult. “The competition is brutal. Here, we have the national chains such as Nevada Bob’s or Edwin Watts, as well as the chains like Wally’s.”

“You have to truly want to be in this business, and be willing to work. Those that are, will hang around.”

“Those that think they will make a huge living in this business now, it isn’t going to happen. I believe it has had its heyday. I think its a perfect correlation to what happened earlier to the PGA golf pros. About 15 years ago, PGA pros were making a good living, but since then the management companies have come in and changed things. Average salaries aren’t what they used to be.”

With the increase in competition, Gafner credits service as the key factor for the success of Dallas Golf. “There is a difference in true, pure service … it’s not what you hear, or read in a book, or what you train some one to do. It has to be in your heart, or you’re just like everyone else. Most retailers today are really selling price.”

In 1990, Gafner made what he considers to be his biggest mistake. “I decided to get into manufacturing, and it almost put me out of business. I had the knowledge, but the timing was bad. The Japan market had just passed its peak.”

Dallas Golf survived and has continued a pattern of steady growth. A fourth store in Addison was recently opened, and Dallas Golf expects to gross over $2.5 million in 1996.

Looking at the golf club industry today, Gafner believes the price of golf clubs will come down, except for the small segment seeking the latest technology.

“For a small segment, the price will continue to go up. They want the latest technology, and right now that is Titanium. Two or three years from now, something else will come along and be the next hot item. But overall, I believe the price of golf clubs will go down, because the costs of the materials, shafts and heads continue to go down. In a couple of years, you will be able to buy a set of graphite shafted irons for what you pay for steel now.”

Looking ahead, Dallas Golf is excited about the possibilities of the internet. “I consider myself a little guy, and here I get a chance to mix it up with the big boys. Its an unique opportunity. I am an idea person, and the possibilities are literally endless. I will also work to take care of what I’ve got, maintain our customer base and accept smaller growth,” said Gafner.

Although the challenges of operating a golf retail business are increasing, Gafner believes “those that are willing to work, and make sacrifices will be able to make a living.” “God gave me the talent to make, build and work around golf, and that is where I will stay.”

“I have learned one valuable lesson. Stay bored with what you are good at! I have seen many people get bored because they are doing so well, or pretty good. Then, they jump into something else. I plan to stay bored with what I am doing, because its not that bad,” says Gafner.

Dallas Academy, where his wife Holly works, is a school for those with learning differences, like dyslexia. “They teach students to learn life skills, and some are able to go on to college. I’m now on the Board of Directors, and am the Head of Development.”

Don Gafner played four years of college golf, first at LSU, then the last two years at East Carolina. “I was able to play with the likes of Jodie Mudd, Mark O’Meara, and John Inman.”

His greatest golfing memory came recently, in November, when he had the opportunity to play Cypress Point. “I came to the scenic #16 even par. I bogeyed the hole and finished with a 74, playing one ball. I thought it was a good score, considering I have been out of playing golf seriously.”

If he could play anywhere, Gafner would play a round at Augusta National with Arnold Palmer.