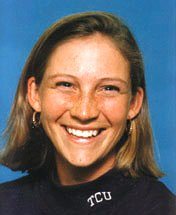 So you’ve just concluded your first regular season being named first-team all-conference, WAC Female Athlete of the Week twice and WAC Freshman of the Year, have you met your goals this year? “It’s been nice,” Angela Stanford modestly replies, “I didn’t really expect everything that happened this year.”

Stanford entered TCU last fall with the frame of mind of “getting there and see what happens, ease into it and get comfortable.”

It didn’t take long. Stanford finished second to her teammate, sophomore standout Susan Horton in the Frogs’ season opening victory at the Ram/Cowgirl Fall Classic. “All of the sudden I am thinking well maybe I can compete,” smiles Stanford, the 25th ranked player in the nation.

“Maybe I do have a chance every time,” continues Stanford, who recently won the long drive competition at the WAC with a 274 yard blast. “And that makes you just want to work harder.”

A valuable lesson Angela learned early from her parents. Stanford applies the lesson daily to her golf game and the result is a rapidly improving short game along with a strong tee-to-green game. It also motivates her academically as Stanford, a Radio-TV-Film major who after her LPGA playing days would like to become a broadcaster, strives to become the first member of her family to graduate from college.

Lady Frog head coach Angie Ravaioli-Larkin says Angela’s ball-striking, short game and competitive nature are her strengths. “Her game is already at a really high level, and she will only get better from here.”

It is the consistency of Stanford’s freshman year that stands out – she has finished in the top 16 of every tournament this season. “You never know with freshmen,” says Ravaioli-Larkin. “I knew it was going to be good, but I didn’t know it was going to be this good.”

One quickly realizes Angela is a likeable college coed with a fun personality and a nice wide smile. Obviously enjoying this period of her life, Angela’s eyes frequently lighten up the conversation with a delightful youthful effervescence thrown in. Angela could be your typical girl next door.

But don’t let that fool you – Stanford’s opponents may find her smile more Jordanesque – relaxing her opponents before moving in for the kill.

Stanford began playing golf at age 10 when her dad handed her a club and said let’s see what happens. Angela played a number of sports as a youth, but focused on golf and basketball in her high school years in Saginaw. A point guard who admittedly liked to shoot, Stanford was named second team all-region her senior year. Although she could not remember the last time she “shot hoops,” Angela said she practices free throws when she is struggling with her putting. “They both involve rhythm and repetition,” she explained.

Stanford describes herself as a “scrapper!” with a “never-say-die” attitude. This attitude recently paid off at the Betsy Rawls tournament in Austin. Although struggling with a final round 78, Stanford came to the 18th green needing a two-putt to cap off an upset victory by the Lady Frogs. “I was glad I didn’t know (the score).” After calmly sinking the second putt, she was shocked with her teammates victory screams. “That was a great experience, really neat,” says Stanford.

Following the victory, Ravaioli-Larkin told her team that this is only the beginning. “They will look back and realize that they were the ones that got it started again. The foundation for what is coming ahead.”

The young Lady Frogs vaulted into the Top 20 and were selected to play in the West Regionals. Ravaioli-Larkin expects the team to become national contenders and a perennial Top 20 selection. Her team’s strengths are their short games, team unity, desire and willingness to compete.

The future looks bright next season when highly recruited Brenda Anderson of Austin joins the Lady Frogs. “She was the one I wanted, and we are fortunate to get her,” says Ravaioli-Larkin.

Shannon Fisher, Susan Horton, and Amanda Workman will return as juniors, while Dana Schmid is the only departing senior.

Stanford credits a great deal of her success this season to a simple motto preached by her coach. Instead of thinking what total for a round you want to shoot, “you have to take it one shot at a time and you will achieve your goal.”

“I think it’s a great motto for life,” adds Stanford. “Take it one day at a time. If you give everything you’ve got to each and every day, you are going to be happy with the final outcome.”

From the look of things, Stanford will be happy for a long time to come.