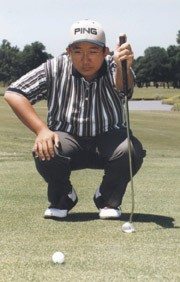 Newman Smith Golf Coach Randy Northrop received a surprise after Spring Break this year, and luckily it wasn’t news of a skiing accident of one of his players. It was a new addition to his team, 15 year old Korea native Jay Kim.

Although Nothrop had been told that Kim would make an immediate impact on his team with consistent scores around par, he was hesitant to get too excited until he could evaluate Jay himself. Kim’s first high school event was all the proof coach Northrop needed. It was a junior varsity event where Kim battled cold, blustery conditions and carded a 71, good for a top 5 finish. Not bad for his first high school event.

Early success earned Kim a spot on the varsity team, where he led Newman Smith to victory in district play by carding a 73 and 77. Shortly thereafter Kim followed his individual victory in districts with a 75-67 victory in the regional tournament in Lubbock. Although his team finished a disappointing seventh, Kim’s performance earned him a spot in the state tournament May 8-9 in Austin.

Although he is new to high school golf here in the US, Kim is no stranger to success. After taking up golf at age 8 in his native Korea, Jay spent his early teen years playing in Australia, where his dad worked as a teaching pro. Just last year Jay won his age group in the Greg Norman Junior Foundation Tournaments, and placed third in the overall competition. Jay also tried to compete in the Australian Open against his idol Tiger Woods, but failed to qualify.

Kim, humble and unassuming, credits his distance off the tee as well as the accuracy of his thirty to seventy yard pitch shots for his recent success. Kim plans to take all of his shots to Austin for the state tournament, but does not expect to win.

Coach Northrop, however, feels Kim’s ability to focus and limit distractions will bring him success on and off the golf course. Who knows, it may even bring him a state championship.