Calling on the Hog 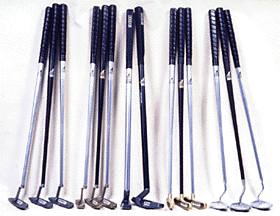 Dallas-based Dogleg Right hopes to be the next Odyssey

In the continuing search for a magical club that will lead to lower scores, many players are turning to a putter with … a bigger head… a bigger grip … and a bigger shaft. THE HOG PUTTER!

President Dave Billings of Dogleg Right, the manufacturer of the club, believes this “totally oversized” design concept may be the most significant development in putting since Ping introduced heel-to-toe weighting thirty years ago.

Billings produced the prototype for the original model in 1994 and quickly realized the putter featuring a one-inch non-tapered aluminum shaft had multiple benefits that had never been utilized in putter design before.
“Our putters reinforce what the teaching professionals have been promoting – the modern one-piece pendulum-type stroke which takes the wrists out of play.”

“It’s more stable and much more consistent in terms of distance control.”

“It also solved the problem of an oversized head putting too much strain on the shaft. Heel-to-toe weighting, which was designed to resist twisting, also strains normal shafts during the stroke. The oversized shaft solved these problems immediately,” Billings said.

“The original product was form follows function. The physics and engineering was to produce the most stable, consistent forgiving putter that we could come up with.”

Since then, Dogleg Right has developed models with slightly smaller shafts that are tapered from butt to tip. “We took the original innovation and packaged it into more traditional aesthetics to make it more attractive to tour players,” says Billings, who believes their use of his putters adds credibility and exposure.

During the last year and a half, over seventy players on the five major US tours have used the putters in official competition. Former US and British Open Champion Tony Jacklin was the putting leader at the 1996 US Seniors Open. Larry Loretti, currently second in putts per round on the Senior Tour, is “still oinking” after switching from a long putter. Others include Russ Cochran and Tom Wargo, as well as Dana Quigley, a top PGA club pro now playing the Senior Tour.

The idea of the Hog putter came to Billings when he watched his then three year old son David pick up a golf club bag tube and started putting with it. “He had a natural pendulum stroke,” said Billings. “I had given him chopped down putters before and he was too wristy.”

Instinctively, Billings, a golf club consultant with over ten years of experience including working in research and development for Yonex, thought of oversized tubing. This concept was based on his prior experiences developing components for the frame of a wide body tennis racket as well as noticing the oversized tubing of his Kennendale mountain bike led to a stiffer, more stable ride. Golf in the SouthWest

The Hog name was chosen because it was descriptive of the product, had some “marketing oomph” and was one that consumers would enjoy.

The company name, Dogleg Right, was picked because it was unique as well as something that golfers would be familiar with. The logo is designed after Billings’ dog Birdie, a retriever who helped with the prototype testing by retrieving putted golf balls.

After incorporating and developing a business plan in 1994, Dogleg Right launched the first putter at the January 1995 PGA Merchandise Show in Orlando. “We didn’t have a booth,” said Billings, “so I did ‘guerrilla marketing,’ going aisle to aisle.”

“Because of our small marketing budget, we decided to introduce the most radical- looking one first (one-inch non-tapered) in order to attract attention and be newsworthy,” Billings said. The focus then turned to attracting touring pros for added credibility. Player feedback was used to design the newer, tapered-shaft models that are more traditional and aesthetic. Local club and teaching pros are also an important target.

Dogleg Right now has more than 2000 accounts in all 50 states and 33 countries, including golf shops at Pine Valley, Cherry Hills and Spyglass. Edwin Watts also carries the products.

Many in the industry have since adopted the oversized shaft geometry. The Hog Putter was on the cutting edge of what Billings refers to as “visible technology.” “This is where consumers can perceive the benefits of a product, and the advantages are visible.” Taylor Made was also a pioneer with their bubble shaft, and the industry is now full of “bulges, bumps, flares and big butts.” Golf in the SouthWest

In September, Dogleg Right will introduce their first sand wedge at the PGA Show in Las Vegas. The new club (3/4″ at the butt, 5/8″ at the tips) will be the first shaft overdesign in a swingable club – the shaft connects outside of the hose instead of the traditional inside.

“This larger bonding area is significant in terms of feel and especially in the reduction of torque,” explains Billings. “It’s a stiff shaft made of 7000 Series Alloy.” Feedback from pros indicates it “feels extremely soft with new levels of accuracy and consistency as benefits for the golfer.” Trajectory control, an important feature of a wedge in the winds of Texas, is another asset. Golfers are able to hit shots with lower trajectory using the same amount of loft.

Plans are for a 60-degree lob wedge and a 52-degree gap wedge to be introduced in January at the PGA Merchandise Show in Orlando.

As long as golfers continue to have an appetite to try a new putter, look for the Hog to keep gobbling up a sizeable market share. “It’s distinctive, and it works,” says Billings.