Adams Golf Rides the Success of the Tight Lies 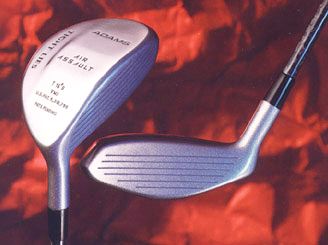 “We had no tour exposure.”
“We didn’t advertise.”

“Golf clubs become popular for two reasons – tremendous advertising and promotion or visibility on tour,” says Barney Adams, namesake and CEO of Adams Golf. “We had neither.”

Yet in the mega-marketing world of the golf equipment industry, the Tight Lies fairway wood from Adams Golf was named the 1996 Breakthrough Golf Product of the Year by the International Network of Golf, a 650 member organization of leading media and golf industry executives.

“We never directly marketed the Tight Lies fairway wood,” says Adams. “Now, the product has developed a life of its own.”

After the product was introduced, Adams started receiving “calls from golfers who had tried the club from friends and had to have one,” and so he soon decided to market just one club which now comprises over half of their sales.

The idea for the four wood with an upside down head just kind of came to Adams as he recognized that the industry was making a mistake by making fairway woods with larger heads. Adams’ patented design lowers the center of gravity which results in the player getting the ball airborne from lies that would normally require an iron.

The result … “the ultimate fairway club, it’s so easy to hit,” says 1993 PGA teacher of the year Hank Haney.

“Studies show the basic difference between a pro and an amateur is their second shot from 175-210 yards out. The pro will hit the same number of greens from there as he would with a 7 iron. Amateurs rarely hit the greens.” says Adams.

“I knew this is the one area more so than any other, that if you could help the average golfer, then you could make a significant contribution to their golf game. The tight lies is designed to hit the ball 180-220 yards. It inspires confidence at the address position and is easy to hit.”

While amateurs stand to benefit from Adams’ design, the club has found its way into the bags of touring pros, including Tom Watson and many senior players.

Survey conducted by the Darrell Company

“We don’t pay them because we can’t afford to,” says Adams. “We made the clubs available, they hit them and they liked them.”

Now, Adams is trying to ride the success of the Tight Lies, introducing infomercials, and focusing on marketing one club.

“In the golf industry, there are market players and niche players. We are a niche wannabe,” says Adams, who sold over 8,000 Tight Lies in 1996.

To continue growing, Adams plans to “achieve enough market momentum with the Tight Lies so that we can become a real company in the golf industry, with an identified niche and customer base which will allow us to stay in business.”

Adams hopes the success of the Tight Lies will in turn increase brand awareness of their customized irons. Adams’ irons, which are well respected in the industry for their high standards, consistency and performance, are based on their patented VMI technology, which guarantees absolute swing feel consistency for every club.

Unlike the industry leaders, Adams doesn’t change the design of his clubheads each year. “We base our design on performance. Until I come up with a design that works better, why change?”

Most Adams customers choose their SuperShafts, a proprietary design of filament wound graphite which is played on all tours.

A defining moment in the life of Barney Adams, a former Corning engineer, occurred when he was at a semiconductor trade show at Silicon Valley in the early 1980’s.

“The show started at 8:30am, and the first time I looked at my watch was a 10 minutes to 9. That was the message, get the hell out of here, you don’t belong here.”

So Adams walked out, never to return.

Mr. Adams, who played college golf at Clarkson in Pennsylvania, then became involved with the golf equipment industry full-time when he joined up with short game guru Dave Pelz. However, the company failed when the owners, an oil business, ran into financial trouble and the return of featherlites started outnumbering their sales.

After developing the patented VMI technology, which guarantees absolute swing feel consistency of every club in the set, Adams soon realized “innovation by itself was not enough, you still needed to get the product to the marketplace.”

Adams then hooked up with Hank Haney, who requested he do some custom club fitting. The custom-fitting system was fine tuned and “became the vehicle to put the product in the hands of the consumer, and overcame the lack of marketing.”

This scientific approach to custom fitting was then marketed to golf facilities around the nation, and is now available in over 100 locations. This system is still the cornerstone of Adams business.

“I am very fortunate to work in something that I care for deeply,” says Adams. However, he goes out of his way to discourage others from entering the highly competitive industry. ” I tell them exactly what to expect.”

“You can’t be normal and work the better part of 7 days a week, have it encompass all of your thoughts, and be completely driven by it, but that is what it takes.”

Many golfers are glad that he continues to put forth such a great effort, and the results show in the quality and consistency of the clubs he makes.