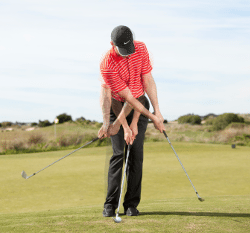 Trouble chipping onto the green from 10 to 20 yards.

Daniel McNair (15) of Tennille, Georgia USA writes…
I have one question for the pro. Before I ask it though, I want to say that this page is a really good idea. Golf is a really hard game and it has alot of unanswered questions. 1. I’ve been having trouble chipping onto the green from 10 to 20 yards. I need help on how to chip over bunkers or hills from this distance without rolling off the green. The length of swing, stance, and club position would be very helpful.

Scott Robbins:
Good question, great insight to what you need to know. Stance should be slightly open to counter how much you open the face of the club. Feet should be in normal shot position (wide) and ball should be forward in your stance. Swing should be a little more up and along your feet line going back. Coming through the club should go high and the face should remain open. Also work on having your eyes look up where you want the ball to fly. This will help you get it higher in the air. Junior Golf Tips

Trouble getting out of the sand and onto the green from 30-150 yards.

Mike Melena of Denver, CO writes…
I have trouble getting out of the sand and onto the green from 30-150 yards. What should I do?

Scott Robbins:
The long bunker shot is one of the most difficult in golf. The best way I ever heard it described was by Tom Kite when we used to discuss it at Horseshoe Bay C.C. in Marble Falls, Texas in 1977. Tom said the easiest way to hit that shot was to grip down on the club the same amount you dug your feet in the ground, play the ball slightly back in your stance and as Tom said “hit it as hard as you can.” What you are actually doing is trying to take little or no sand to hit the shot to the green.
In summary:
1) Play the ball back in your stance;
2) Grip down on the club the same amount you dig your feet into the sand;
3) Use the same club you would use from the fairway;
4) Hit the ball first and hard.
Good Luck! Junior Golf Tips

Tips regarding short and long bunker shots like around 5 yards and 35-60 yards.

Jason Gironella of the Manila, Philippines writes…
I’ve been playing since I was 9 years old. I’ve joined the optimist junior world in San Diego and some international tournaments. Can you give me some tips regarding short and long bunker shots like around 5 yards and 35-60 yards. Thank you so much.

Scott Robbins:
Jason, Sounds like you have a pretty good game and have competed all over the world. How exciting!!! Bunker play is a matter of understanding two letters of the English alphabet and how they apply to the flight of the golf ball. The two letters are “U” and “V”. The “U” shaped swing will produce a lower ball flight, shallower and thinner cut of sand and therefore longer bunker shots. The reason is that the “u” shaped swing forces the sand out of the bunker towards target, therefore as the ball flies on the seat of sand, it is flying forward and lower and farther.
The “V” shaped swing produces the opposite. A higher ball flight, a deeper cut of sand and usually shorter bunker shots.
Use which one where? The longer (35-60 yard) bunker shots require a more “U” shaped swing. To produce this you should take a pretty normal stance (square, club face towards target) and stand a little closer to the ball and a little taller than normal. This will cause a shallower swing plane and a more “U” shape to the swing.
The shorter shots require a more “V” shaped swing. Stand a little farther away with a wider stance. Open the clubface to produce a loftier flight and turn your feet and body until your clubface is facing the target. Swing along your feet line and a little more steeply than usual (the wider stance will cause you to bend over more and create a steeper swing. With both swings, to control distance all you have to do is practice and see how far the shot flies with different length of your backswing. Good Luck and find a PGA Professional to help you with your bunker play.