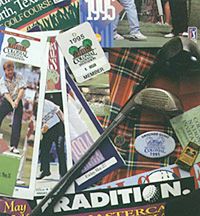 Although we’re not through with this decade, and century, yet, the six tournaments already played in the 90’s are some of the most exciting in all of Colonial’s 50 years. Specifically, the last four in a row all came down to the very last putt, including two sudden-death playoffs.

Ben Crenshaw In 1990 windy conditions kept the field bunched up, and by Saturday the cream had risen to the top. Leading were former champ Ben Crenshaw and two-time U.S. Open champ Curtis Strange, by one shot over Nick Price and another former champ, Corey Pavin. Those four players were collectively eight-under-par on Sunday, but Crenshaw was hot and accounted for half of those strokes himself. His front nine 30 left all others in his wake, as he dominated with a three-shot victory.

In 1991, perfect scoring conditions sent the field on a major birdie binge. Steve Elkington tied the course record of 62 and Keith Clearwater tied the front nine record of 29. Tom Watson scored the only eagle on the 10th hole in tournament history. The man with the “perfect swing”, Tom Purtzer, could muster only an opening 70 for 44th place. By Sunday he was tied for 15th place, four shots back of the leaders. No other Colonial champ has surpassed so many competitiors on the final day, or come from so far behind after the first round. Purtzer shot a 64 Sunday, but the tournament was very much in doubt as he stood in the back sand trap on #13. Staring at him was a bone-chilling, delicate chip shot toward water. Before he could second-guess himself, Purtzer grabbed his putter and putted the ball out of the bunker and into the hole for an incredible birdie. He went on to win by three.

The 1992 event required sudden-death for the first time in six years. Two former champs from the ’80s battled it out on Sunday, with Bruce Lietzke draining a birdie putt on the first extra hole to nip Corey Pavin. Four former Colonial champs in all finished in the top 10, a Colonial record.

It was the foreigners’ time to shine again in 1993. Drawing the most attention on day one was former champ Ian Baker-Finch, who doffed his shoes, socks and trousers on #13 in order to step in the lake to hit his second shot. A nationwide cable TV audience got a close-up view of his boxers, and later the PGA Tour sent out a quiet memo to players about keeping their pants on during tournaments. (The next year, Colonial presented him with a pair of plaid boxer shorts.) Fast fairways and no wind led to more records, as the 36-, 54- and 72-hole marks fell. Clearwater and Lee Janzen both shot 61s to lower the 18-hole mark. Clearwater’s included a back-nine record 28, and Wayne Levi matched that on the front nine. On Sunday, a two-man race between Greg Norman and Fulton Allem went down to the wire. Norman’s thrilling birdie on 18 left Allem with a knee-knocking five-footer for par and the win. He made it, for a new record of 16-under-par that still stands today.

The 1994 event started out as a battle of U.S. Open champions, with Hale Irwin and Scott Simpson trading the lead for three days. Then the world’s hottest player, Nick Price, decided to join the fray. Staging the greatest come-from-behind victory in Colonial history, Price came from seven shots back to tie Simpson and force a playoff. A five-birdie string on the back nine was interrupted by a night’s sleep as two rain delays prevented completion on Sunday. Price birdied the last three holes prior to the delay. Monday morning he birdied the first two, and then the first playoff hole to top Simpson. It was the first time since 1965 the tournament extended past Sunday.

In 1995, an exciting birdie-birdie finish by Tom Lehman gave him a one-shot victory at nine-under-par. He was the first Colonial champion to birdie the tournament’s difficult, final two holes. That compares to 1980 when Lietzke birdied two of the last three holes to win, and 1965 when Bruce Crampton birdied four of the last six holes for the title. Lehman has gone on from there to establish himself as one of the world’s best players.

Corey Pavin The 1996 50th anniversary championship wracked the players with gusty winds and dry fairways. Reigning U.S. Open champ Corey Pavin emerged from the battle victorious with the highest winning score at Colonial in 13 years – eight under par. Only 11 players finished under par for the tournament as Pavin collected his second Colonial title. Combining his mastery of the Riviera Country Club, comparisons to Hogan abounded.

Tiger Woods roared into Colonial in 1997 fresh off back-to-back victories at the Masters and GTE Byron Nelson. However Tiger faultered late, as David Frost captured the title before record crowds.