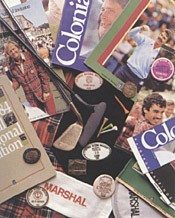 1980s Was the Decade of Records and Rain at Colonial

The decade of the 1980s couldn’t even get started without a rain delay, then climaxed with one of the tournament’s most exciting finishes ever. Amazingly, Colonial had gone 15 years without losing a day to rain, but the first NIT of the ’80s actually began on a Friday, and the tournament experienced some sort of rain delay several years of the decade. Bruce Lietzke blitzed the course with a record-tying 63 in round one, including an ace on #16. Former champ Rod Curl 5-putted the 16th. Lietzke then tied the tourney’s 36-hole record, with Ben Crenshaw and Tom Watson breathing down his neck. The 36-hole Sunday finish featured Lietzke and Crenshaw duking it out, and Lietzke had a precarious one-shot lead at the mid-day break. Crenshaw birdied #12 for the lead, then Lietzke almost aced #16 again. His birdie tied for the lead. Both parred the 17th, but Lietzke drained a thrilling 25-footer for the win at 18. It marked the first time in history that a Colonial champ birdied the 72nd hole for the win.

The 1981 event featured a rain-delayed second round and another 36-hole Sunday finish. Colonial celebrated the 40th anniversary of its 1941 U.S. Open by hosting a 9-hole exhibition featuring such memorable players as Byron Nelson, Fred Haas, Toney Penna, Herman Keiser, Dick Metz, Henry Ransom and Johnny Revolta – all veterans of the ’41 championship. After Saturday’s completion of the second round, Fuzzy Zoeller held a slim one-shot lead over Hale Irwin. Sunday was hot and humid, which helped Zoeller’s temperamental back, but the popular star had never played a 36-hole day in his competitive career. At the mid-day break, he held a three-shot lead over Curtis Strange, and then expanded it to six shots on the front nine of the afternoon round. That lead plummeted to just one shot with seven holes left, but birdies at 12, 14 and 15 iced the win.

Jack Nicklaus Excitement reigned in 1982 when Arnold Palmer and Jack Nicklaus entered after six-year absences. Both superstars broke par Thursday to highlight a crowded leaderboard and spur the tournament to its first $1 million gate. By Saturday, Nicklaus and David Edwards were nipping at the heels of 1978 U.S. Open champ Andy North, who led by two. North and Edwards were tied for the lead after eight holes Sunday, but blew up together on #9. Nicklaus claimed the lead with a birdie on #10, but was caught by North with birdies on 11 and 12. Then, right after missing a short par putt on #15, North saw his title hopes vanish with the Golden Bear’s dramatic, curling birdie putt at #16. At age 47, Nicklaus had finally conquered Hogan’s Alley and buried the ghosts of 1974, when he lost by one.

The 1983 tournament was a logjam from start to finish, highlighted by crazy weather in the third round with a 21-degree temperature drop that carried wind and rain along with it. Fuzzy Zoeller and Jim Colbert anchored a five-way tie for first after the third round, and swirling Sunday winds guaranteed a battle for survival. Both players held their own, but stumbled in with bogeys on #18 to tie and force Colonial’s first sudden-death playoff. A six-hole battle ensued, finally won by Colbert when Zoeller bogeyed #18 again. Colbert then almost apologized to Zoeller, “I didn’t care about the money; I just wanted the title.” To which the former champ replied, “Why didn’t you just say so!?” It is still the only Colonial playoff not won with a birdie.

Jacobsen, who had been in that five-way tie with 18 holes to go in 1983, roared back in 1984 with an opening 64. After settling into a two-man race with a red-hot Payne Stewart after three rounds, he informed the public that he was dedicating the tournament to his ill father, who had just been diagnosed with cancer. Stewart led by two after setting a 54-hole record of 12-under 198, but lost the lead on #6 Sunday to Jacobsen. They played tag all day, and Stewart led by one at the 18th tee. His drive, however, strayed right and under a bridge, allowing Jacobsen’s par to tie. Jacobsen cleaned up quickly, birdieing the first playoff hole for the win. Former champ Ben Crenshaw became the first player in history to eagle the defiant hole #5 during the tournament.

In 1985, Mother Nature finally smiled on Colonial, and the Tour’s 1984 Rookie of the Year, Corey Pavin, took advantage. Course records fell like gimmie putts all week as windless conditions prevailed. Pavin lowered the 72-hole course record by three shots, carding only two bogeys the entire tournament. His 14-under total, along with his 36-hole record of 10-under, would stand for eight years. Joey Sindelar’s eight-under 62 (with a bogey on #5) and Tom Watson’s front nine 29 also hit the record books. On Sunday veteran Ray Floyd charged out of the gate by birdieing the first five holes, but disappeared with a double-bogey on #8 and a quad on #9. At 25 years, six months and three days, Pavin became Colonial’s youngest champion, besting Dave Stockton (1967) by four days.

Windy conditions prevailed for two rounds in 1986, bunching up the field for a horse race. Then rain on Saturday kept the starting gates closed and forced Colonial officials to go for a shortened, 54-hole event, as a poor forecast for Sunday threatened the chance of getting in even 18 more holes. A cool and windy day greeted the contestants for the final round, but thankfully the rain stayed away. Payne Stewart fired a stout 66 and waited in the clubhouse with the lead. Tom Watson (64) and Bernhard Langer (67) mounted fierce charges but tied for third with Bill Rogers, two shots behind. Dan Pohl birdied #16 to tie Stewart and force a sudden-death playoff. He then promptly birdied it again to win on the first extra hole. Watson’s finish marked the sixth time in his last eight Colonial appearances to finish in the top five.

The third 36-hole finish of the decade, and its most famous, highlighted the 1987 Colonial tournament. Friday’s play was washed out, and after the cut on Saturday 63 players were within seven shots of the lead. On Sunday, local favorite Ben Crenshaw seized the lead after 54 holes as players teed of holes #1 and #10, and could not re-pair between rounds. Thus unknown Keith Clearwater, who had shot an incredible 64 that morning to tie defending champ Dan Pohl for second place, remained in obscurity teeing off away from the leaders on #10. Davis Love III, firing an equally hot 65 to tie for fifth position, also began the last round on the back nine. That obscurity didn’t last long, however, as both players kept up their torrid pace all afternoon. Clearwater’s winning 64-64 finish overshadowed the awesome 65-66 performance by Love, who placed second. Clearwater was the third player to win at Colonial on his first try, and is the only champ to finish on the ninth hole.

If you had tried to pick the 1988 Colonial winner you would have lost a bundle. You see, he had played the tournament so poorly in the past that he took two years off in order to arrive with a fresh attitude. He had never broken par in 11 years and 35 rounds at Colonial, missing the cut in 1984 and ’85. The tournament was an exciting dogfight from start to finish, but a brilliant closing 65 by Lanny Wadkins overtook Ben Crenshaw and Joey Sindelar, who finished one shot back with Mark Calcavecchia. Wadkins’ dramatic birdie on #18 averted a four-man playoff. Crenshaw ignited the crowd with four consecutive closing birdies, including an incredible 40-footer on 18. The ensuing roar rattled the bricks of Colonial’s stately clubhouse.

The decade closed with another surprise winner in 1989. A top Australian player named Ian Baker-Finch, playing in the tournament on a special invitation from Colonial, opened with a 65 to lead by one. Paul Azinger eagled #5, then whiffed a putt on #12. After Friday, two players from another British colony, Nick Price and David Frost, were just one back of the Aussie. But another 65 on Saturday separated Baker-Finch from the field and he coasted in on Sunday with a four-shot victory. He joined countrymen Bruce Devlin and Bruce Crampton as Colonial champs from “Down Under.” It was his first victory in America, but his 10th worldwide.