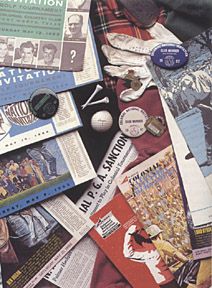 1960s a Turbulent, Exciting Time for Golf and Colonial

Professional golf began to explode in the 1960s, with television and fans jumping on for a ride that hasn’t slowed down yet. Colonial’s first event of the decade featured great weather and a different leader every day. On Sunday, Julius Boros birdie the 17th hole to break a tie and win by one shot, but not before Australian Kel Nagle’s 50-foot putt on #18 for a tie circled the cup and refused to drop.

The 1961 tournament was a benchmark one for Colonial. The event sold more than $100,000 in tickets and saw 50,000 people march through the turnstiles, both records. “World Amateur” champion Jack Nicklaus made his first appearance here, joined by British Amateur champ Charles Coe and U. S. Amateur champ Deane Beman. Kel Nagle, paired with Hogan during the first round, carded the tournament’s first ace in history, on No. 13. After the cheering subsided, a stone-faced Hogan deadpanned, “Good shot,” and then smiled. That popular story has been retold many times over the years. Nagle finished second once again, though, as Doug Sanders captured the title by one shot.

Arnold Palmer In 1962 Arnold Palmer was taking the Tour by storm. After winning three out of four tournaments, and two in a row, he wanted to take off a week – which happened to be Colonial week. Tournament Chairman Bing Bingham hopped on a plane to Las Vegas and persuaded Palmer to honor his prior commitment to the Colonial event. Palmer agreed, proceeded to win the Vegas Tournament of Champions that weekend, and took two days off before flying into Fort Worth late Wednesday. He then dueled with Gary Player for four exciting rounds as they traded the lead. On Saturday, Bruce Crampton stood on the 18th tee with a chance to tie Hogan’s course record of 65 with a par. He knocked his second shot into the lake for a double bogey, but was still tied for second place with Player. Sunday’s round was incredible. Playing together, Palmer and Player struggled mightily, shooting 76 and 78, respectively. Crampton stood on the 18th tee with a chance to win, but knocked it into the water again, and lost by a shot. A 69 by Johnny Pott tied Palmer for first place, so an 18-hole playoff Monday was needed to produce a winner – Palmer. It was his third win in a row, and he finally got his week off. Crampton got a lake named after him.

1963 was a stormy year, and a turning point in the future of Colonial and golf. The Tour and its players were gaining collective strength and demanding more control over events. A spat between Colonial officials and Don January grew into a full-blown Tour feud. Just one week prior to the tournament, the event’s field was an unknown, and its future was in jeopardy. Once again, Bingham came to the rescue. Fences were mended and the tournament was a big success. But defending champ Palmer and Masters champ Jack Nicklaus couldn’t bring down Julius Boros, who became the first man besides Hogan to win more than one Colonial championship. Ironically, it was the first NIT missed by Hogan.

National television embraced the National Invitation in 1964, as ABC broadcast the event Saturday and Sunday. Gary Player led after one round, but lost his touch after rain canceled Friday play. Billy Casper stormed into the lead in a 36-hole Saturday, and dusted the field on Sunday to win by four. An early TV finish at 4 pm saved the day, because rain poured from the sky at 4:30.

Crampton exorcised his watery devil in 1965 and captured the Colonial title. But another watery devil – rain – left its mark. The final round was canceled Sunday and Monday. Canadian George Knudson, who led all the early rounds, claimed after Monday’s rain-out that he was the only man in history to lead a golf tournament for five days and still not win. Finally, on Tuesday, the players battled it out. Don January, Tony Lema and Gardner Dickinson all briefly grabbed the lead. But Crampton shot four-under on the last six holes to claim a three-shot win. As he stood in 18 fairway with a two-shot lead, he contemplated laying up to take the dreaded lake out of range. “But it was vitally important to me that I win like a true champion, worthy of carrying the NIT crown,” he said later. So he bravely knocked a six iron on the green and two-putted for top share of the record $100,000 purse.

Trivia buffs should know that the 1965 Colonial NIT featured the Tour’s first use of the “waiting-for the-ball-to-drop” rule. (The rule was created after an incident in the 1964 Phoenix Open with Don January.) Tommy Bolt waited two minutes on Colonial’s 14th green Friday for his ball the drop off the lip and into the hole, and was penalized. Also this year, a national poll of media pronounced Ben Hogan as the “Greatest Professional Golfer of All Time,” and he was honored at a large gathering Thursday evening.

In 1966 another Australian, Bruce Devlin, led from start to finish, though only won by a shot. He would be Colonial’s last foreign winner for 23 years. In the broadcast booth for national TV that year was none other than Byron Nelson, who made his last appearance in Colonial’s tournament field.

In 1967 an unknown 25-year-old named Dave Stockton shocked himself and the golf world by winning the tournament. He had gotten into the event as a Champions’ Choice, where former champions select two promising young players to join the elite field. He led after the first two days and was tied with Tom Weiskopf going into the final round. Weiskopf took an early lead Sunday but faded, and Stockton won by two shots.

Billy Casper joined Julius Boros as a two-time Colonial champion by winning the 1968 event. He was tied with a hot Gary Player after three rounds, but windy conditions scoured the field on Sunday. Everyone, that is, but Casper. His 68 included a double-bogey but won by an amazing five shots.

1969 brought significant changes to the course from the Trinity River levee project, especially holes #7, 8, and 13. Another stellar field battled it out, with Nicklaus, Player, Crampton and January the leaders going into Sunday. But a lanky 41-year-old veteran on the verge of retirement shot an amazing 66 to beat Player by a shot. He was Gardner Dickinson, and he credited the victory to a 1 1/2 hour lesson on Thursday from friend Ben Hogan, who was unable to play that year.

Colonial saw its one millionth fan pass through the gates in this decade’s final year, and it marked the first time the field was large enough to necessitate a cut after 36 holes. Just around the corner were the 1970s. Times, they were a changin’.