In the spirit of the never-ending search for a new, exciting and hot golf destination, the small Central American democratic nation Costa Rica is currently undergoing a golf boom, the likes of which produced Porta Vierta a decade ago.

Costa Rica, located between Nicaragua and Panama, a three-hour flight southwest of Texas, has nearly doubled the number of golf courses in the last couple of years of more layouts and plenty of new golfers arriving each year.

Costa Rica Golf Adventures, the country’s largest golf travel company, bills golf in Costa Rica as, “Golf on the Wild Side,” and there are plenty of wild and wonderful golfing opportunities. “We’ve seen golf travel nearly double or triple in the last couple of years and it’s only going to continue to grow,” said Landy Blank, the recently elected president of the Costa Rica PGA, and Director of Golf at Cariari Country Club in the capital city of San Jose.

“We currently have three 18 hole courses here and with the new Marriott property opening this fall along with the (Greg) Norman project and other construction this is becoming a fast-growing golf destination.”

The $40 million dollar Marriott property, titled Los Suenos, will have a Ted Robinson designed course and will be located on the breathtakingly, beautiful Pacific coast, Southwest of San Jose. Los Suenos will join the five-star Melia Playa Conchal Beach and Golf Resort, which is also on the Pacific Coast, Northwest of San Jose, as the two full-service golf resorts in this tropical setting.

The Marriott resort is scheduled to be ready to open in late 1999 or early 2000. The Norman project, located nearer to the country’s eastern shore, has been delayed by funding problems, but is scheduled for a 2001 open. There are many other 9-hole courses in the small tropic nation.

Another 18 hole course, Rancho Las Colinas Golf and Country Club, is located 20 minutes from the Playa Conchal. The Ron Carl design wanders over the hills and valleys of Tamrindo. While more rustic than the Garra De Leon, it offers plenty of scenic vistas, especially on the back nine.

With many direct flights from Texas to Costa Rica, golfers can fly into the capital city of San Jose in about three hours. There are also direct charters into the new Liberia airport, which is three hours northwest of the capital city. You can get to the resorts on the Pacific coast in three ways. Drive (3 ½ hours), fly to Liberia and drive 45 minutes on dirt roads or the most daring, but effective route, take a single engine plane to a tiny (I do mean tiny) airport 10 minutes from the Playa Conchal resort in the small town of Tamarindo.

If you fly into San Jose from the States, your first stop should be at Cariari CC which is associated with the Melia resort on the outskirts of town.

The course, par 71, 6,501 yards from the back tees, is very tight and tree-lined. Located on the grounds of a former coffee plantation, the course was designed and built by George Fazio and his now famous nephew Tom Fazio.

Aside from being able to play the ball once you keep it in the fairway, you will also avoid the lizards, monkeys and snakes which can lurk in the rough. The lizards, what us Texans would call Gila Monsters, can range in size of 2-3 feet, so ball hunting is at your own risk.

The course layout is beautiful, with several holes being cut into the side of the San Jose hills with great views of the countryside and downtown San Jose. There are several blind shots and tricky greens, so caddies are a must on the course which can help visitors quickly gain a home court advantage.

Golf is surprisingly cheap, either as part of a package or alone. Green fees at Cariari are roughly $40. Play in the mornings if possible as rain is often a factor in the afternoon. Temperatures stay constant in the 70s and 80s year around with the tropical humidity of Houston or Miami. Because Costa Rica is so close to the ecuator the sun goes down at 6 p.m. each night regardless of season.

The golf at Melia Playa Conchal is much more wide open and spread out, but visually stunning with views of the ocean, mountains, the dense wilderness and man-made obstacles. Jones spent $7 million dollars and four years building the course as part of the lavish resort and certainly didn’t cut any corners. 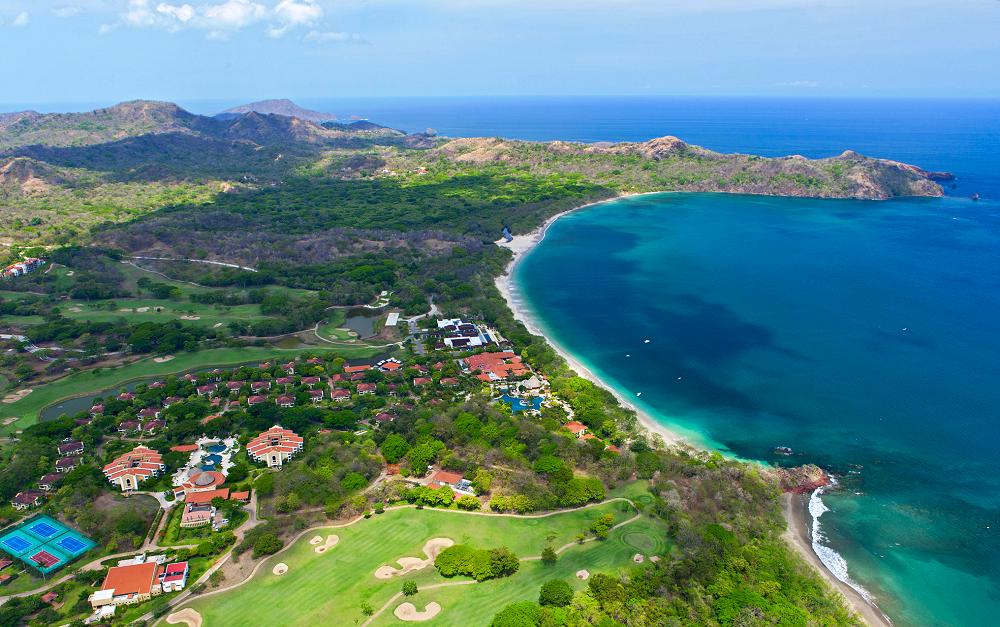 There are numerous elevation changes, dozens of bunkers, several man-made lakes plus views of the Pacific Ocean on several holes on the front and back nine. There is nothing like lining up putts on the par 4 16th and listening to the pounding of the waves in the background.

Garra De Leon is 7,080 from the back tees with a par of 72. The Jones layout tests you with several different kinds of shots and changes the variety of the layout to keep you from being bored or lulled into a sense of false security.

Outside of golf, there is enough to keep you busy for a week on the resort which has 300 villa-style rooms. There is the largest pool in Central America, the shell beach (one of two in North and South America) and ocean right next door, several restaurants, disco, tennis courts and miles of walking trails amongst the tropical beauty. A highly effective shuttle will carry you wherever you want to go on the property.

You can contact the Melia Playa Conchal directly for package information and golf fees at 800-33-MELIA.

Rancho Las Colinas recently played host to the Costa Rica Caddie Championship and attracted more than 60 caddies from around the country. They saw a firm and flat course on the front nine with plenty of steep elevation changes on the back side. At 6,800 yards from the back tees, the par 72 course is plenty of challenge. Call 506-383-3759 for more information and rates.

While it may be Golf on the Wild Side to eager golfing tourists, the courses are great and continuing to get better, the views are spectacular and the weather is highly conducive for golf. For information on golf packages, call Costa Rica Golf Adventures at 888-261-6645.