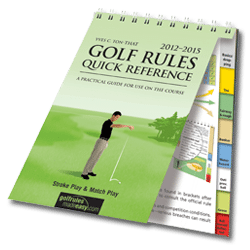 John Camp (16) of Delhi, New York writes…
I was in a tournament and on my second shot on a hole the ball looked as if it flew out of bounds. My friend’s caddie said to hit another so I stated the Type and number of ball and then proceeded to hit my shot onto the green. When we got to the green my first ball was on the cartpath next to the out of bounds and I dropped that ball and prepared to play on. My friend and his caddie stopped me and said that I would have to play my second ball due to the fact that I never stated THIS IS MY PROVISIONAL BALL. I called over the rules official and he ruled in my favor. I played out the first ball and made par and proceeded to the next hole. WAS THIS THE RIGHT RULING? My friend didn’t think so. Thanks

Scott Robbins:
Rule 27-2a states that the player “…shall inform…that he intends to play a provisional ball, and he shall play it before he or his partner go forward to search for the original ball. If he fails to do so and plays another ball, such ball … becomes the ball in play under penalty of stroke and distance (Rule 27-1); the original ball is deemed lost.” Therefore when you found your ball on the cart path, it was lost.
You got a favorable but wrong ruling from the official. At that point, if you felt it was wrong, you could have played both balls and appealed the decision. If it was a stroke play event, your friend, a fellow competitor, could have also appealed the ruling.
The Rules of Golf can be a friend or a foe. Just like anyone you first meet, you have to get to know them better before they become a true friend. Keep studying the rules, working on your swing and your mental game too. I hope to see your names among the best players in the country some day.