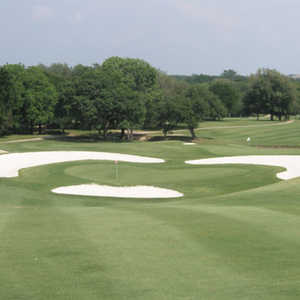 A Great Place to Relax and Truly Enjoy Your Round.

In his 1994 book, Great Texas Golf, author Pat Seelig wrote, “If you can’t relax and enjoy golf at Mill Creek, you can’t do it anywhere.”

That, perhaps as much as any other observation, sums up the atmosphere of Mill Creek Golf & Country Club, located in the tiny community of Salado, 10 to 15 miles south of Temple, Texas off Interstate 35.

Salado has always been a place to get away, even from the days in the 1800s when the Chisolm Train made its way down what serves as the town’s Main Street. Once the second largest population center in Bell County, though, Salado settled into its present role beginning around the 1940s, when word begin to spread of the fine dining available at the Stagecoach Inn.

First opened in the 1860s, the Inn was restored in 1945, and it remained Salado’s chief claim to fame until the mid-’60s, when it was joined by a new residential community. At the time Mill Creek opened, however, golf was a bit of an afterthought, consisting of a 9-hole track designed by the original ownership and unveiled in 1968.

That approach changed in 1979 when a group of new investors took over. Led by Don Mackie, who remains as Mill Creek’s managing partner, the development began to take on a new look, and golf was to play a major role.

“Some of his course is in the same area as the old course,” says Mackie, “but there’s none of the old course left.” As a result, golfers visiting Mill Creek are treated to a course built professionally, with a wide range of skill levels in mind.

Salado is geographically located at just the point where the Texas Hill Country begins to fade into rolling prairie. “It’s very much a Hill Country setting,” says Mackie. “It’s on the fringe, but it still has the rolling hills, creeks, bluffs and so on.”

And that’s true. The difference is that you won’t find the severe terrain often in evidence at courses deeper into the Hill Country. Most holes at Mill Creek sport gentler elevation changes, but there are a couple of exceptions. The starting and finishing holes, for instance, drop some 40 feet from tee to fairway, giving you plenty of time to admire that long, hanging tee shot you just hit.

Both holes feature plenty of hitting room, too, although casual swings can result in casual reloads. Cedars and oaks line both sides of #1, while the 18th is flanked by water right and out-of-bounds left.

Salado Creek winds throughout Mill Creek, and either it or its tributaries come into play on at least 10 holes. The pond right of #18 is also a factor on #14, which means you’ll have to deal with water on a dozen holes.

Trent Jones used sand liberally in his design some 55 to 60 sand traps, greenside and fairway, can be found on Mill Creek’s 18 holes. Two of the most intimidating traps are a fairway monster on #5 and a greenside imp behind the 14th putting surface.

The one on the fifth hole, a dogleg-right par 4 of 373 yards, is in play from the word go. Try to steer far enough left to take it out of play, and you’ll have an uphill approach to a green tucked behind an oak, between two more traps that are only slightly less threatening. You can, of course, cut the corner over the trap, but only if you’re capable of keeping your tee ball high enough to clear a specimen oak just short of the trap.

None of the bermuda greens at Mill Creek can be considered flat or slow, and, in fact, they might be considered a bit faster than average. That’s what makes the trap on #14 particularly dangerous. It’s not particularly deep, but it sits above the green, where the only recoveries available are downhill to a green that slopes away a lot. Holding the green from it is a test best performed by pros, with the rest of us usually settling for a chip back up to the pin our orbs can only wave at as they pass.

So each hole at Mill Creek has its individual challenges, but in every case, well-planned, well-struck shots will earn their rewards, without calling for heroics. The par 3s, for example, range from 109 to 169 yards from the white tees, and a club or two longer from the back. That’s not more than the average golfer should be able to handle, but each is set up to take a pound of flesh for those who can’t. Numbers 12 and 16, for instance, require carries over water, while #6 plays alongside and right of Salado Creek. Number 2 is the most open of the set, but a steep rise to the green and an entrance flanked by sand means you’ll have to hit a solid golf shot if you hope to leave yourself two putts for par.

Of the three par 5s at Mill Creek, only 477-yard #1 can be considered easily reached in two shots, unless your name is Tiger Woods. That’s due to the manner in which Trent Jones laid the holes out. The ninth hole might seem reachable when you look at the card and note only 494 yards of length, but an approach diagonally over Salado Creek that much clear oak trees just short and left of the green convinces most golfers that a mid-iron across the creek and a try at the green in three is more prudent.

Two doglegs on #13, first to the left and then to the right, are more than enough to prevent bravado in its case better to play a 3-wood/mid-iron combination to set up an open approach to a green that’s surrounded by trees and fronted by water.

The hardest of Mill Creek’s holes comes in the form of a dogleg-right par 4, and can be found in the fourth slot. At 398 yards, it requires a long, well-placed drive past trees inside the turn but short of the forest on the outside. If you don’t manage that, you’ll have to lay your second shot up, short of the creek just in front of the green. Try to play to the shallow green from anyplace besides the middle of the fairway, and you’re in for a double bogey if you’re lucky.

Most of Mill Creek’s par 4s, though, do not fall into the penal category. There are a couple that require sturdy carries over water and a few that make you think before you hit (#17, for example, sports a blind, uphill approach), but generally speaking, they’ll allow you to play to your handicap more often than not. Golf in the SouthWest

Remember, we’re talking relaxation here, and you want a calm stomach to take to Salado’s eateries after you play. Guests at Mill Creek are more than welcome to try the club’s dining room and a trip to the Stagecoach is almost a must, but live a little and explore— Mackie lists Browning’s Courtyard Cafe, La Mansion de Salado, Cathy’s Boardwalk Cafe and the Village Cafe as a quartet of other can’t-miss stops.

Gift shops, antique shops and historical landmarks abound, if you’re so inclined and have enough energy left — otherwise, you can retreat to Mill Creek’s lodging, which range from recently-remodeled studios to one-bedroom cottages to multi-bedroom houses.

That might be the best idea, since there’s more golf to be played tomorrow. Relax and enjoy — that’s the point, isn’t it?